Celebrating Administrative Assistants Day The Women Behind The Woman

Strong women in leadership are often overlooked, but even more overlooked are the women who have helped them along the way. The women who are behind the scenes, handling schedules, balancing multiple spinning plates at the same time, empowering their employer to continue on their path of leadership.

Though not in the spotlight, secretaries, administrative assistants, and personal assistants make the world go round. In the case of Aunty Huldah Buntain, many people were always there to help and support her in so many different ways. Two important women behind the scenes of Huldah’s life were Bobbie and Taryn. Bobbie was Huldah’s right hand woman whenever she was in Kolkata, Taryn oversaw everything when she was in the US.

We want to honor the work that these women humbly did to support Huldah and the work that continues to this day. We asked Bobbie a few questions about her time working with Dr. Buntain and she shared incredible insight on what it is like to support the work of an incredible woman in leadership.

Having worked with Aunty for 40 plus years, we developed a wonderful bond.  I miss her deeply.  She will always hold a special place in my heart.

HFD: HOW IS IT THAT YOU CAME TO WORK FOR AUNTY BUNTAIN?

BOBBIE: Mrs. Buntain, who we lovingly called “Aunty” held me in her arms when I was six months old.  I studied in an Anglo Indian (English medium) School till [the Buntains’] school started functioning in 1964.  My mother and dad separated when I was around 5/6 years old and I was left in the care of my maternal grandma and maternal aunt.  My aunt being the only working member could not afford to pay for my education so Aunty Buntain very kindly put me on the sponsorship program.

Having said all that, to answer your question: I had finished my Secretarial Course which included shorthand and typing and was working as a Secretary in a company called “Tribeni Tissues” filling in a leave vacancy.   It was my first job. Aunty heard about this and requested me to join [her] office soon after to help her with secretarial work.

HFD: WHAT WERE THE MOST EXCITING THINGS ABOUT WORKING FOR AUNTY BUNTAIN?

BOBBIE: Being the Secretary of the Co-founder was indeed an honour.  “Secretary” is now an old fashioned word so Aunty would refer to me as her “Administrative Assistant” and sometimes “Personal Assistant” too.

“Secretary” is now an old fashioned word so Aunty would refer to me as her “Administrative Assistant” and sometimes “Personal Assistant” too.

In the early years, I got to travel with Aunty when she visited the different projects in various parts of India.  I have been to Orissa, Ranchi, Dimapur, Manipur, Jaigaon, Siliguri, to name a few.  Wonderful days!!!

In more recent times, having lunch with her daily in her office located on the first floor of the Mercy hospital was special. We used the extra desk in her office as our dining table and many times would have others join us too. 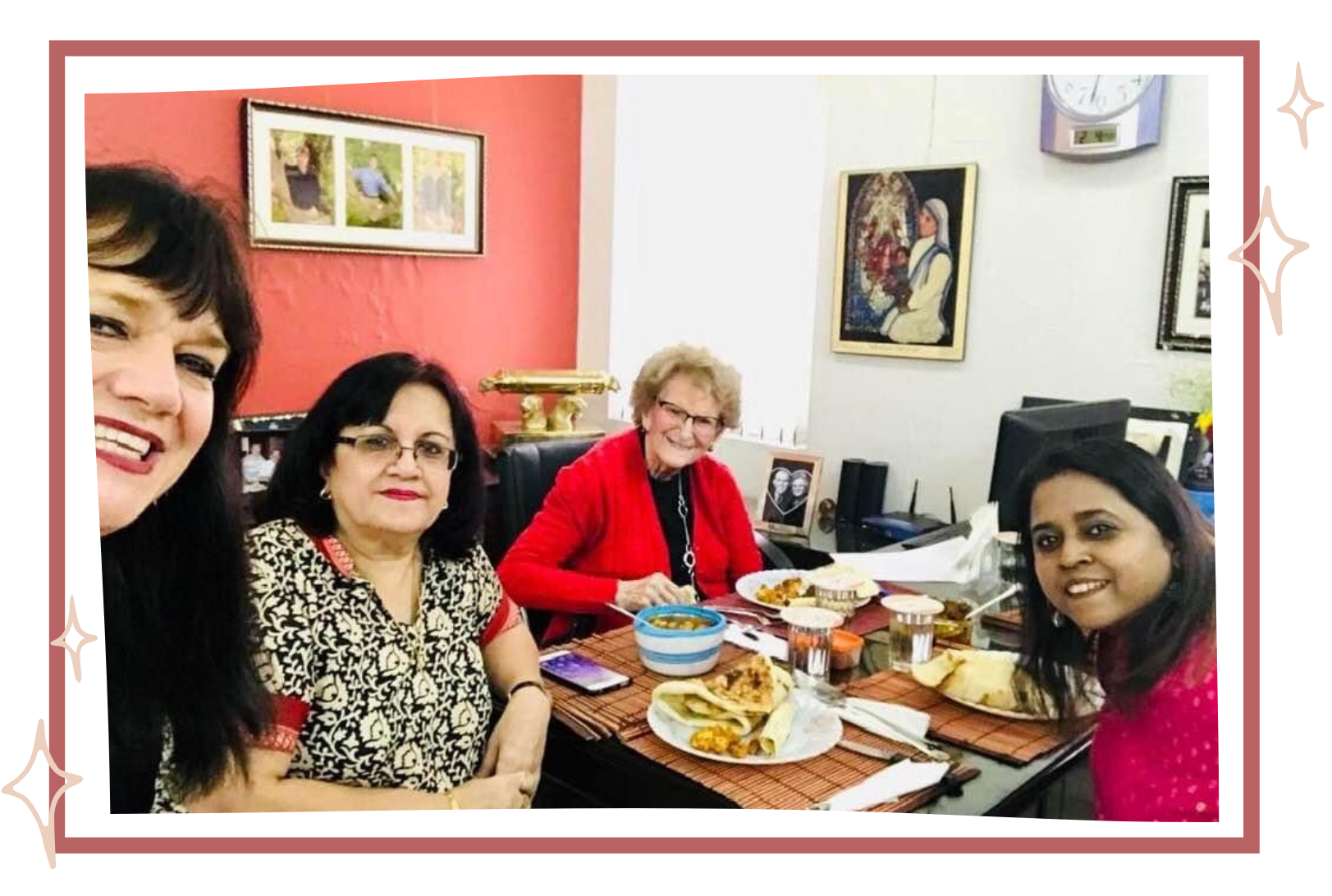 HFD: WHAT WERE THE CHALLENGES OF WORKING FOR A WOMAN WHO HAD SO MANY IMPORTANT RESPONSIBILITIES?

BOBBIE: Being that there was tremendous pressure of work, I had to often work long hours.

In the early days, we had to use manual typewriters as there were no computers at that time with its conveniences.

Using these manual typewriters wasn’t the best because if you made a mistake in what you were typing, you had to erase the mistake by using correcting fluid and then type over.  The alignment had to be correct and many times the correction did not look good so oftentimes I would end up typing the whole page again.  It was quite an effort especially if the volume of work was a lot.

Also, in the early days we would take all our dictation in shorthand and then type it out.  Aunty would dictate very fast so deciphering what she dictated was a challenge.   I eventually got used to her speed and managed well.

What a relief it was when computers were introduced because I would then type what Aunty dictated straight on the computer instead of taking notes in shorthand. Also, you could revise what you had typed and easily correct mistakes.

HFD: WHAT QUALITIES OF LEADERSHIP AND PERSEVERANCE DID YOU LEARN FROM DR. BUNTAIN?

BOBBIE: Being Punctual – Aunty was very particular about people being on time.  She was never late for office or any appointment/function.  In fact, she always arrived before time.  She did not like it at all when people were late for their appointments, unless of course there was a genuine reason.

Being Organised – Aunty was very organised.  She would keep all her papers neatly put in different folders and labelled accordingly. This allowed her to find things easily instead of having to scramble through many papers looking for something.

Working Hard – Aunty set such a good example of putting in so many hours of work.  She was a workaholic.  She would come in early and leave late, during which time it was only work for her except for perhaps half an hour break for lunch.  That too, if she could get back to her work immediately after eating, it made her happy.

I would wonder where her energy came from because I, who was so much her junior, would get tired but she would not.

I would wonder where her energy came from because I, who was so much her junior, would get tired but she would not.  I had to literally tell her I could not go on working any longer and that we needed to close shop for the day.  However when I would leave, she would continue working.  She would type what she could which became difficult for her to do in the last few years so she began making appointments to see people after office hours.

She would receive plenty of emails and even though some of them were not important, she made sure she responded to them.  I liked that about her.  Each and every email meant so much to her.

She was excellent at multi tasking.   People would be amazed at how she could hold a conversation with a person while typing.  They say you can’t do two things at the same time, but Aunty could. It was amazing how fast her fingers flew across the keys of the manual typewriter and later the computer keyboard.

Being Compassionate – Aunty was genuinely compassionate towards the needy.  I saw how concerned she would be if someone needed assistance and would go all out to help, whether it meant making a phone call, writing a note or even visiting an office of a person who had the ability to assist.  She even helped needy people with personal funds.  I was a witness to this.

Being supportive and encouraging – Aunty received many invitations to church events, personal functions etc and I would admire how she made it a point to attend each and every one of them.  She could have made an excuse for not being present as age was against her but no, for Aunty age was just a number.  She pleased and encouraged all with her presence at different events.

Humble and Approachable –  Aunty never made anyone feel that [even though] she had a high position in the Mission, they needed to keep their distance.  On the contrary, she was always available to talk to them and even gave people appointments if they needed to meet her privately.  She loved having people around her.

Aunty never made anyone feel that [even though] she had a high position in the Mission, they needed to keep their distance.

Appreciative and Grateful – Aunty was very appreciative and always thanked me for doing her work.  She did not have to do that because I was being paid a salary for the job I held.  However, she was always so grateful at the end of the day, for the work I did for her.  This made me feel appreciated and motivated to give of my best.

HFD: WHAT IS A FUNNY MOMENT THAT YOU CAN RECALL WHILE WORKING WITH HER?

BOBBIE: One day Aunty was dictating to me, and I was typing away with my eyes fixed on the computer screen.  Suddenly there was silence.  I  wondered what happened. When I turned to look at Aunty, she had dozed off.  She was like that for at least 5 minutes before I called out to her.  The poor lady woke up quite surprised but was back at what she was doing, like nothing happened.  We were always in awe of her sharp memory which in her case did not deteriorate with age. 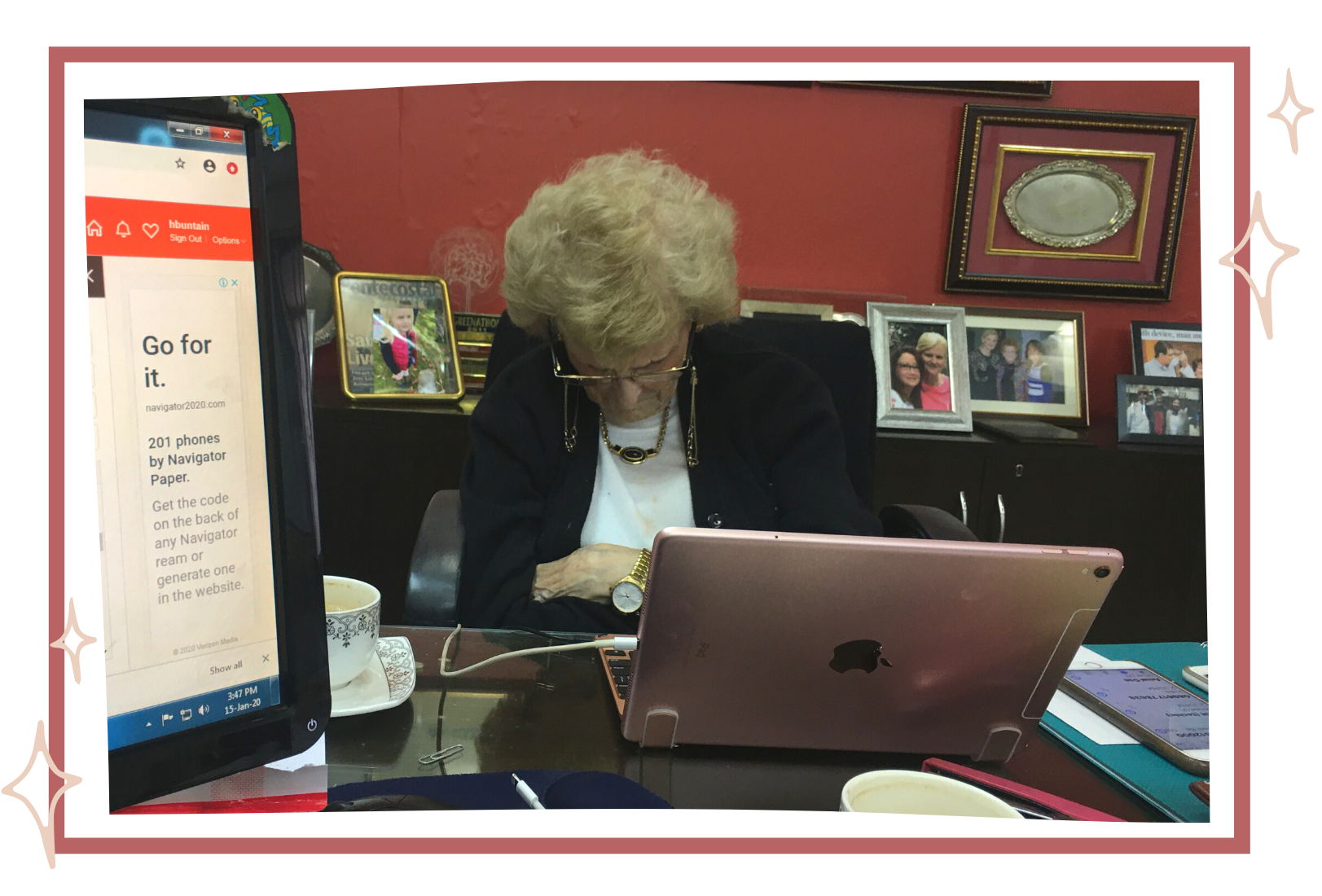 HFD: WHAT’S NEXT IN YOUR LIFE?

BOBBIE: I officially retired in June 2014, but my services were extended for seven more years due to Aunty needing my help with the work she was doing after retiring from her position as Chairman the Mission in Kolkata.  I am now relaxing and enjoying my retired life.

I might mention that Aunty was not only my Boss but like a Mother to me, especially after my mother left me. What I got to achieve in life was all because of the love and help she extended to me.  I learned so much from her and always say she gave me good training.  We got on very well.  She was such a likeable person and most kind.

Thank you, Bobbie and Taryn,

and all the other women out there who humbly serve to support leaders everywhere. YOU, in fact, are the true leaders.

How HFD is Committed to #BreakTheBias