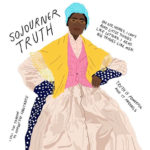 Isabella Baumfree was born into slavery in 1797. She was sold many times, was abused, was forced to marry, and had no formal education. In 1826, after a broken promise of being set free, Isabella escaped from her captivity, and her journey towards truth began.⁣⁣
⠀⠀⠀⠀⠀⠀⠀⠀⠀⁣⁣
Isabella Baumfree changed her name in 1843, to Sojourner Truth. Sojourner believed that it was her religious obligation to speak truth to power. She became a strong evangelist for her faith, for the abolitionist movement, and for women’s suffrage.⁣⁣
⠀⠀⠀⠀⠀⠀⠀⠀⠀⁣⁣
Sojourner Truth died in 1863, and never saw the realization of her causes come to pass. Nevertheless, Sojourner has left her mark on history, as her truths ring true today and they will ring true forever. Her legacy will always be a woman of faith, a woman of courage and a warrior who fought for truth.⁣⁣ 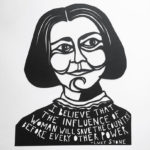 Lucy Stone (1818-1893) was an eloquent advocate for women’s equality in all areas of life – politics, education and the home. During a time when women did not speak in public, Lucy Stone made her living lecturing on women’s rights and the abolition of slavery. She was one of the most famous and sought-after speakers in the United States and changed the hearts and minds of many in her audience – including Susan B. Anthony. ⁣
⠀⠀⠀⠀⠀⠀⠀⠀⠀⁣
In addition to founding the American Womens Suffrage Association and The Women’s Journal, Lucy was the author of many firsts – the first woman in Massachusetts to graduate from college and the first woman to keep her name after marrying. ⁣
⠀⠀⠀⠀⠀⠀⠀⠀⠀⁣
While Lucy Stone did not live to see women gain the vote, her activism helped lead the way.⁣ 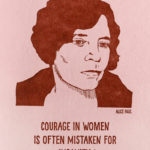 Alice Stokes Paul (Jan. 11, 1885-July 9, 1977) was an American suffragist, feminist, and women’s rights activist, and a key leader of the campaign for the 19th Amendment to the U.S. Constitution. ⁣⁣⁣
⠀⠀⠀⠀⠀⠀⠀⠀⠀⁣⁣⁣
In 1912, after going to university in England and meeting Lucy Burns, the two came back to the U.S. and joined the National American Women’s Suffrage Association. Paul lead the Washington, DC chapter, but soon her and others would split to form the National Women’s Party. ⁣⁣⁣
⠀⠀⠀⠀⠀⠀⠀⠀⠀⁣⁣⁣
Paul would go on to organize parades and pickets in support of suffrage. On April 7, 1913 Paul founded the Congressional Union for Woman Suffrage to focus specifically on lobbying Congress to amend the Constitution. ⁣⁣⁣
⠀⠀⠀⠀⠀⠀⠀⠀⠀⁣⁣⁣
After many years of protests, pickets, and strikes, the 19th amendment was finally approved, allowing women the right to vote! ⁣⁣⁣
⠀⠀⠀⠀⠀⠀⠀⠀⠀⁣⁣⁣
Afterward, Paul and the National Women’s Party shifted their focus to the Equal Rights Amendment, which would guarantee women the constitutional protection from discrimination. This amendment to date remains unratified. ⁣⁣⁣ 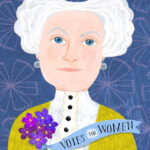 Carrie Clinton Lane Chapman Catt (January 9, 1859- March 9,1947) was a suffragist and peace activist who helped secure for American women the right to vote.⁣⁣
⠀⠀⠀⠀⠀⠀⠀⠀⠀⁣⁣
Catt became involved with the suffrage movement in the late 1880s and joined the Iowa Woman Suffrage Association. In 1900, she became the NAWSA president, filling the seat previously held by Susan B. Anthony. ⁣⁣
⠀⠀⠀⠀⠀⠀⠀⠀⠀⁣⁣
In 1902, Catt founded the International Woman Suffrage Alliance to spread democracy around the globe. In 1904, she briefly retired to take care of her dying husband.⁣⁣
⠀⠀⠀⠀⠀⠀⠀⠀⠀⁣⁣
After spending a few years traveling, she helped found the Woman’s Peace Party in 1915 and returned as president of the NAWSA from 1915-1920 during which time the suffrage (19th) amendment became part of the US Constitution. ⁣⁣
⠀⠀⠀⠀⠀⠀⠀⠀⠀⁣⁣
After the vote was won, she published a history of suffrage in 1923, Woman Suffrage and Politics: The Inner Story of the Suffrage Movement. She then founded the League of Women Voters to educate women on political issues and served as the organization’s honorary president until her death in 1947.⁣⁣

A Genuine Pioneer 111 Trees For Every Girl Born